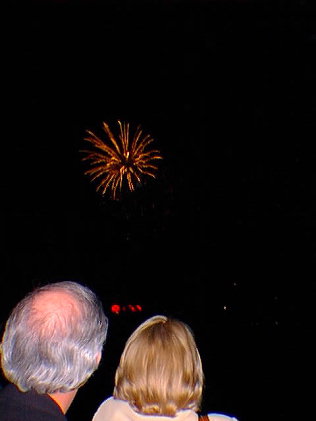 San Francisco celebrated the Fourth of July with a spectacular display of waterfront fireworks. And like anything else, it could be viewed several ways.

Pyrotechnicians launched missile after missile, whining, whistling, and whooshing, into the air in a vast array of colors: yellows, purples and great bursts of red, white, and blue. The precise timing of booms and colorful explosions left most watchers silent.

But there were grand finales--several of them--causing bursts of applause from spectators, who cheered as if the fireworks were music and the pyrotechnicians musicians whom the audience was calling back for an encore.

Admittedly, there was a certain music and grace to the show. Despite booms, bangs, and lesser pops.

Spectators came from near and far to view the show. Dorthy Shaffer, who grew up in San Francisco and said she left her heart in the city when she moved to Santa Maria, drove 275 mile for the show. "I'm really glad the fog didn't roll in," said Shaffer. She recollected a couple of years when the fog spoiled the show. "I think they've learned from experience that viewing is better over on this end rather than down by Crissy Field," said Shaffer.

The air was crisp as cars jammed Herb Caen Way...promenade and 100,000 or more spectators lined the walkway at the north end of the bay.

The best view of the fireworks was along Aquatic Park, Pier 39, and in front of Justin Herman Plaza. Four barges served as missile launch pads for the noisy show. Fire trucks stood by at the north, center, and south of the waterfront.

Mission District resident Matt Ellis said he came down to the waterfront to get a better view and be out of the Mission for awhile. "I thought this would be a safer place," said Ellis.

Another Mission resident, Josh Roise, preferred the view from the top of Bernal Heights. Apprehensive about walking there, however, he took precautions. "I actually wore goggles and pulled a jacket way up over my head."

With the random whizzing of fireworks through thick haze, combined with the odors of sulfur and barbecue, the Mission District resembled a war zone for the evening.

Fire Department Lieutenant Paul Fuhrman said that it was a busy night, but that no major fires occurred. "Between the hours of midnight and six a.m. we reported 325 calls. Nothing big: grass fires, trash fires, medical calls--the usual."

Mission resident Roise may have captured the spirit of the event at his perch on Bernal Heights. "At first I was like, oh, hey, fireworks, whatever; then I was mesmerized and pretty blown away." Then he said it struck him: "What a display of rebellion!"