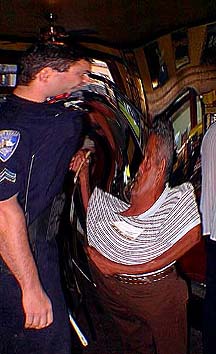 GETTIN' ALL WORKED UP OVER BETA 5

Sometimes new product versions are worth getting worked up about, other times they're not. And sometimes the worthwhile "revs" get no attention, while the trivial ones get it all. It's not a just world we live in--not for people, pets, plants, or products.

While the Beta 5 version of Netscape Navigator 3.0 "Gold" has gotten little press, it has features languishing for attention. Specifically, a just-in-time compiler (JIT) has been added, along with formatting tags that could turn it into a respectable print publishing system.

The JIT is a welcome addition to Navigator because it promises to speed up the execution of Java applets or programs. Until the addition of the JIT, Java code had to be interpreted by the Java Virtual Machine (JVM) in the client browser. The difference in execution speed can be as much as 10X. For some applets speed doesn't matter, but for others it's crucial.

SunSoft, the guardian of the Java programming language, has long talked about a JIT but has yet to deliver. The JIT in the Beta 5 version of Navigator comes then not from SunSoft but from Borland International. According to Donna Sokolsky, spokesperson for Netscape, various JITs were tested by the company and the Borland JIT was the "superior product."

Note, however: The JIT in Beta 5 is available only in Windows 95 versions of Navigator.

While some, such as Terence Parr, Director of the MageLang Institute, have seen the JIT as crucial to Java growth and acceptance, SunSoft is now down-playing the importance of the JIT. The company claims there are factors other than the JIT that can cause poor performance.

While SunSoft shys away from discussing its JIT problem, it is freely discussing "Dev6"--the final pre-release version of the Java Workshop--due out next week. Said Keller, "There is a major improvement in debugger performance and windowing performance" in Windows 95 and NT versions. "That is where a lot of the virtual machine was challenged in performance."

Java Workshop was delayed at least once due to performance problems and negative feedback from developers.

While the JIT in Beta 5 should improve performance of Java applets, the other area of improvement has to do with aesthetics. While the web offers extravagant multimedia features in terms of graphics and sound, it has offered almost nothing to the written word other than supplying a lot of them fast and with hyperlinks.

But according to Sokolsky, a lot of Netscape customers have been asking for traditional text features like those available in the print publishing world--choice of fonts, control of spacing, and multicolumn page layouts.

Netscape apparently took the request seriously. The latest version does not offer the full range of features of a desk-top publishing system, but it is a vast improvement over what has been available to date.

Control of the "whitespace"--the space between words and lines--has caused web page designers much grief in the past.