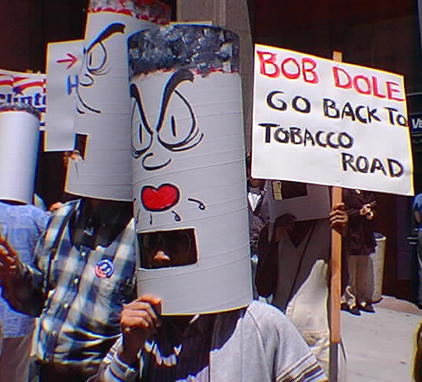 Republican presidential candidate Bob Dole encountered a cloud of protest in downtown San Francisco when he appeared today at the Sheraton Palace for a noon luncheon.

Dole came to speak at a campaign fundraiser where the price of lunch was 1,000 dollars.

Protesters from Californians Against Political Corruption--dressed as cigarettes--fumed about the price tag of Dole's fundraiser.

CAPC helped get 900,000 signatures for a campaign finance reform initiative on the November ballot. "This is exactly the type of corruption we have been working against," said Clayburgh.

About 150 protesters stood behind police barricades across the street from the hotel on Montegomery Street. Ten Dole supporters cheered as he was escorted by secret service agents and 50 SFPD officers into the side entrance of the Sheraton Palace.